Karnataka state government has launched two new schemes, one is Arundhati Scheme and the other one is the Maitreyi scheme for the economically backward section brahmins.

This scheme is a big initiative for the poor brahmins, this scheme will help financially to the people. The state government will give Rs.25,000 to the brahmin brides.

In this article, we have shared the information in detail so that you can have proper knowledge of this scheme. 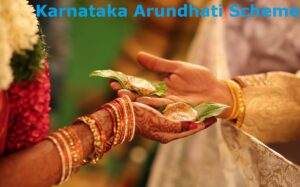 The Karnataka state government has launched two welfare schemes for the economically backward sections of brahmins.

Karnataka State Brahmin Development Board’s these two schemes will provide financial help to the poor brahmins so that they can utilize this money for their needs.

A sum of Rs. 25000 will be given to the economically poor bride under arundathi scheme.

This money will be given to those families who are facing difficulty in getting marriage due to their economical background.

There is approximately 3 percent of the population in Karnataka that belongs to the Brahmin community. This karnataka arundhati scheme covers only brahmin priests and brides who belong to economically weak families.

Under Arundhati Scheme, the family of the bride will be given Rs 25,000 for the marriage. In Maitreyi scheme, Rs 3 lakh will be offered to the bride if she marries a priest. pic.twitter.com/zeedBxgiQO

The karnakata state brahmin development board has also launched maitreyi scheme. Under this scheme women who will marry a priest from an economically poor background will be given Rs.3 lakh.

Under Maitreyi scheme, the board will be offering Rs 3 lakh to the bride if she marries a priest: Archakras and Purohits.

To get this money the married couple will have to be married for 3 years at least. The money will be given in three installments every year.

This money will be given to the family at each year’s end for 3 years.

Under Maitreyi scheme, the board will be offering Rs 3 lakh to the bride if she marries a priest: Archakras and Purohits.

"Under the Arundhati scheme, as many as 550 families will receive the amount and nearly 25 families will benefit.. "https://t.co/TO3OtxPVzJ

The Gram panchayat office will provide detailed information and will help the eligible people to get the benefit of this scheme.