Madhya Pradesh Home Minister Dr. Narottam Mishra has launched this scheme in Bhopal on 11th May 2020. As we all know common people struggle very much to launch an FIR but due to this scheme, you can file the FIR from your home.

The MP Home Minister said that this scheme will big initiative for people of the state. This will solve their problems at their doorstep, they do not have to come to police stations to file a complaint. Here in this article, we have discussed how you can file FIR from your home, so keep reading.

The “FIR Aapke Dwar” (FIR at your doorstep) is a pilot project( trail project) in which a person who wants to file a complaint has to dial the police emergency number 100 to lodge an FIR.

Home Minister has launched this scheme from the Police control room and said now people would not be required to visit the police station to lodge an FIR. Now, the police will come to your home and will lodge the FIR. 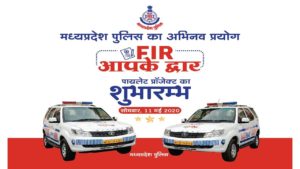 At the current starting stage, this scheme will be implemented in a police station area under 11 divisions (for both urban and rural areas) of the state and also under one police station in Datia.

This Aapke Dwar yojana will cover a total number of 23 police station areas in the state. During the launch of this scheme DGP Vivek Johari, ADGP Upendra Jain, ADGP Telecommunication  SK Jha, and other senior police officials were present at the police control room.

Initial FIR Areas under this scheme

This pilot project will be of 3 months in the starting and if it goes successful then it will cover the whole state. The starting stage Headquarter areas are given below:

If you live under these headquarter areas then you can have the benefit of the scheme. All you have to do is to Dial 100 and police will come to your home and will lodge your FIR.

This yojana will be implemented until August 31 as a pilot project. After this period department will analyze it and if it was successful then they will implement it in the whole state.

The first FIR is lodged by Sunil Chaturvedi of Jawahar Chowk, Bhopal by Dial 100. He has filed the complaint of theft of his vehicle on Dial 100.

When the helpdesk receives a call the First Response Vehicle visits the house of the complainant and takes the necessary actions.

This yojana will make life easier for the people as during that panic time they do not have to rush towards the police station, now just have to dial 100 and help will be on there way.

1 thought on “What is MP FIR Aapke Dwar Yojana? FIR At Doorstep Scheme 2020”